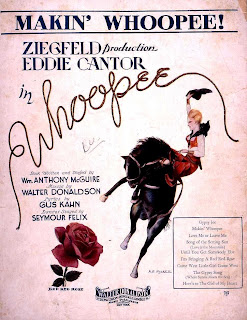 Finally catching up on songs after being in Chicago this past week!
Had a blast!... And now I'm ready to get back to work!
So, I had this song stuck in my head since wednesday night, and
figured I should give it a try...
I've always listened to the version sung by Ella Fitzgerald. LOVE her SO much.
This song was written in 1928 for the Musical 'Whoopee', which Florenz Ziegfeld
(Ziegfelds Follies) produced...until money ran tight and he had to sell the rights to a certain film studio...
Eddie Cantor starred in the  film version as well. Good stuff. :)

There is a version of Cookie Monster from Sesame Street singing a parody of
"Makin' Whoopee" SOMEWHERE on the world wide webs...
But, alas, I cannot find it.
It's called "Eatin' Cookie" and 'it would be awesome & hilarious if I found it.
Maybe someone else can... (Good luck!!)
Enjoy.

Kirabelle Frabotta
I am a singer/songwriter/musician living in Nashville, born & raised in Detroit, eternally chasing truth and expression through that medium which connects us all... music.